The wonderful singer and promoter Sophie Bostock was waxing lyrical about this book to me and I’m so glad that I bought it as soon as she recommended it to me. It is a gem. I learnt so much from this including songs such as The Cutty Wren, The Bitter Withy, and The Death of Bill Brown.

A.L. Lloyd is very thorough and includes lyrics, music and background to all manner of songs from around England and beyond going back as far as he dare go and then some.

A great introduction to land rights in the UK made by Marion Shoard in 1987… sadly very little has changed. Do read her excellent books This Land is Our Land and Right to Roam.

Yale University lecture on Popular Protest by Professor Keith E. Wrightson is taken from his Open Yale online course Early Modern England: Politics, Religion, and Society under the Tudors and Stuarts which has links to all the lectures as videos – the one on Popular Protest can be found as a podcast here or in video form here.

If you read our blogs often, you’ll know that we are massive fans of the podcast in the herd. This one was sent over to us by Peter Bearder who has recently launched an excellent book called Stage Invasion, on the history of spoken word and poetry.

The Deserted Village is a poem by Oliver Goldsmith published in 1770. It is a work of social commentary, and condemns rural depopulation and the pursuit of excessive wealth.

The location of the poem’s deserted village is unknown, but the description may have been influenced by Goldsmith’s memory of his childhood in rural Ireland, and his travels around England. The poem is written in heroic couplets, and describes the decline of a village and the emigration of many of its residents to America. In the poem, Goldsmith criticises rural depopulation, the moral corruption found in towns, consumerism, enclosure, landscape gardening, avarice, and the pursuit of wealth from international trade.

The full poem is much much longer – I have selected my favourite parts below which might be useful to read in a show sometime:

The Deserted Village by Oliver Goldsmith 1770

Dear lovely bowers of innocence and ease,
Seats of my youth, when every sport could please,
How often have I loitered o’er thy green,
Where humble happiness endeared each scene!

Sweet smiling village, loveliest of the lawn,
Thy sports are fled, and all thy charms withdrawn;
Amidst thy bowers the tyrant’s hand is seen,
And desolation saddens all thy green:

One only master grasps the whole domain,
And half a tillage stints thy smiling plain;
And, trembling, shrinking from the spoiler’s hand,
Far, far away, thy children leave the land.

Ill fares the land, to hastening ills a prey,
Where wealth accumulates, and men decay:
Princes and lords may flourish, or may fade;
A breath can make them, as a breath has made;

The man of wealth and pride
Takes up a space that many poor supplied;
Space for his lake, his park’s extended bounds,
Space for his horses, equipage, and hounds:
The robe that wraps his limbs in silken sloth,
Has robbed the neighbouring fields of half their growth;
His seat, where solitary sports are seen,
Indignant spurns the cottage from the green:

But a bold peasantry, their country’s pride,
When once destroyed, can never be supplied.
A time there was, ere England’s griefs began,
When every rood of ground maintained its man;
For him light labour spread her wholesome store,
Just gave what life required, but gave no more:
His best companions, innocence and health;
And his best riches, ignorance of wealth.
But times are altered; trade’s unfeeling train
Usurp the land and dispossess the swain;

Sweet was the sound, when oft at evening’s close,
Up yonder hill the village murmur rose;
There, as I past with careless steps and slow,
The mingling notes came soften’d from below;
The swain responsive as the milk-maid sung,
The sober herd that lowed to meet their young,
The noisy geese that gabbled o’er the pool,
The playful children just let loose from school,

The watch-dog’s voice that bayed the whispering wind,
And the loud laugh that spoke the vacant mind,
These all in sweet confusion sought the shade,
And filled each pause the nightingale had made.

But now the sounds of population fail,
No cheerful murmurs fluctuate in the gale,
No busy steps the grass-grown foot-way tread,
For all the bloomy flush of life is fled.

All but yon widowed, solitary thing
That feebly bends beside the plashy spring;
She, wretched matron, forced in age, for bread,
To strip the brook with mantling cresses spread,
To pick her wintry faggot from the thorn,
To seek her nightly shed, and weep till morn;
She only left of all the harmless train,
The sad historian of the pensive plain.

Someone shared this on social media yesterday and I just want to bookmark it here quickly as it looks like a gold mine.

I’m not sure yet how relevant it is to the current show but if we end up working with our Scottish and Irish friends, this looks like a good place to start exploring due to the way it is indexed.

The parent part of the site also has lots of interesting stuff on it. What I love about this so much is that it is still in super old HTML style which means it is so much easier to navigate and search than all this fancy, flashing, fancy pants and usually pointless web design which is currently the fashion!

Socialism for the rich – a good article about land subsidies (or Common Agriculture Policy Single Farm Payments as they are confusingly and rather misleadingly know!)

David Cameron has said that he sees the purpose of these CAP payments to ‘rationalise the agriculture sector’… which means ‘to put small scale, family farmers and anyone who cares about soil and the environment out of business’ in politics speak.

“They used to use urine to tan animal skins, so families used to all pee in a pot & then once a day it was taken & Sold to the tannery…….if you had to do this to survive you were ‘Piss Poor’

You working men of England, one moment now attend
While I unfold the treatment of the poor upon this land
For nowadays the factory lords have brought the labor low
And daily are contriving plans to prove our overthrow

So arouse you sons of freedom, the world seems upside down
They scorn the poor man as a thief in country and in town

There’s different parts in Ireland, it’s true what I do state
There’s hundreds that are starving for they can’t get food to eat
And if they go unto the rich to ask them for relief
They bang their door all in their face as if they were a thief

Alas how altered are the times, rich men despise the poor
And pay them off without remorse quite scornful at their door
And if a man is out of work, his Parish pay is small
Enough to starve himself and wife, his children and all 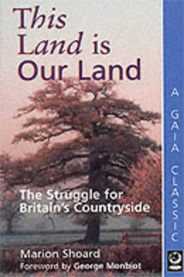 This Land Is Our Land
by Marion Shoard

The definitive book on land both past and present, although it has sadly not been updated since the 80’s.

It gets a bit heavy going in places but the first third, which is a history from Roman times to the present, is totally gripping and a must read for anyone interesting in land and land rights.

I had to take quite a few breaks whilst reading it as sections of it made me really angry and/or sad.